Skip to main content
Posted by The Clarkophile July 09, 2008 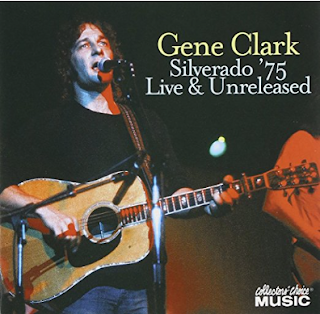 Long familiar to his loyal cult via various bootlegs, ‘The Daylight Line’ was one of three magnificent original songs performed by Gene Clark and the Silverados during their ‘75 tour which would, alas, never see official release on a studio recording (‘What is Meant Will Be’ and ‘The Wheel of Time’ being the others). The recent release of Silverado ‘75 on Collector’s Choice, however, is cause for celebration insofar as one more (master)piece can be belatedly added to Clark’s official canon.

And what a song it is. Even stripped down and performed as a simple three-piece with Clark on acoustic, Duke Bardwell on bass and Roger White on lead guitar, ‘The Daylight Line’ chugs along with contagious alacrity; elements of whimsy and heartbreak sit alongside each other like strangers on a train, suffused by some of the best radio-ready hooks Clark produced during the 1970's.

Thematically, ‘The Daylight Line’ is a train song travelogue serving to foment the narrator’s deeper concern of abandoning the hectic pace of the modern city for the more rustic comforts of the country. Stuffed on an overcrowded train, he heads to the club car to consider his plight: "I delivered to the club/proceeded on a bottle of wine" (I adore that line). And, as they say, in vino veritas, we soon learn of the complications arising from the decision to embark upon this train ride: a woman has been left behind in the city. Is this separation temporary or permanent? Clark leaves the relationship question unresolved, preferring instead to conclude the song on a double chorus, which may itself carry two interpretations:

"Watching all the coastline roll, like anywhere it really could go
I never thought I'd strike a rhythm that would leave you cold."

He doesn’t say "back to you" or "away from you" it really could go, it’s "anywhere." Similarly ambiguous is the line "we got something between us," which seems to acknowledge the emotional bond between the couple, but might just as easily testify to the physical distance keeping them apart; a distance which gets greater even as he watches the coastline pass by his club car window. In truth, he never actually comes out and says he’s headed for the country, but the line "I’d be home in the city but really that is not my pace" tends to leave little doubt as to what sort of pace would be more to his liking. After all, this is still Harold Eugene Clark from Tipton, Missouri. The chosen mode of travel, with its slower pace and connotation of old-fashioned, homespun sensibilities, accentuates this feeling.

One cannot help but wonder what a full-band arrangement of this song would have sounded like. With the right producer and session players it might have been one helluva single for Gene. Is it possible he simply didn’t grasp how great the song was? After the commercial failure of the towering No Other it’s a distinct possibility that Gene was now second guessing himself; no longer the best judge of his own work.

Performed as a three-piece the song still dazzles. Gene spits out the first lines with his best cigarettes-and-whiskey voice, thankfully eschewing the kind of Appalachian yodeling which crept into his singing during this period—an affectation which is not for all tastes. The extant instrumentation in the Silverado '75 arrangement provides the bones for the fleshed-out full-band version which sadly never came to fruition: Clark’s strident strums provide the percussive basics; Bardwell’s loping bass and White’s country-flavoured picking provide a continuous series of catchy licks which could have easily been translated into an overtly commercial production approach: slide, pedal steel guitar, choral/horn arrangements—the possibilities for this song are virtually endless. And inexplicably, for reasons perhaps only known to him, Clark eventually left the song behind, it’s potential never to be fully realized—much like the chronic underachiever himself.

Someone really ought to do a full studio workout on this number. It’s crying to be covered.
But even in this rough-edged, stripped-down arrangement, ‘The Daylight Line’ is still a joy, redolent with the same rustic charms its narrator rolls toward and its author celebrates.
Email Post

ge said…
you bring out qualities or accents I missed, terrific. Gene had such a way with lyrics, his intro to SHE LOVES YOU on a bootleg I heard today mentions his [better than I'd known--oh Mr Einarson??] friendship with Lennon---can you 'imagine' what magic that blest collaboration might have made?? they share a playful surreal lyric panache; wow, those 2 distinctive voices harmonizing...
and throw in Richard Farina on dulcimer while we're dreaming
13 July 2008 at 19:52

The Clarkophile said…
Hi ge!
Once again, thank you for reading and responding. I appreciate every one of your comments.
Didn't know Gene and John were friends. No wonder it hit him so hard when Lennon was killed.
14 July 2008 at 15:51

carlo said…
really enjoyed reading this,it's a song that caught my attention a long time ago ,i'll have to revisit it tonight.
27 July 2008 at 17:02

Anonymous said…
Saw him perform it live in Mendocino in 1975 with a full band with rhythm section. I thought it was a great song at the time just for the music. Until I picked up the Ebbets Field bootleg (same gig as the Collector's Choice release, but a different night) I always thought the refrain started with, "Watching all the coastline grow"--which would have been his take on the growing population and resulting construction along the Mendocino coast, much as "Something's Wrong" communicated the same about his boyhood haunts. In other words, I did not know it was a "love song" until the 90s when I heard the bootleg.
22 May 2011 at 11:02