Skip to main content
Posted by The Clarkophile October 12, 2008

My Held-Back Pages: Into the Vacuum of Gene Clark Sings for You, Part 2 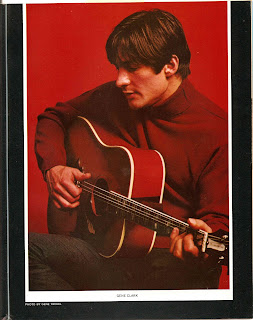 The narrative is the stuff of adolescent melodrama: A spat between two young lovers, which begins as a standard he said/she said, escalates, and eventually spills out of an apartment house into the street. Some of the apartment dwellers are curious enough to take a peek; others remain aloof. The slightly inebriated young man pleads for his lover not to go, drunkenly entreating the help of others, before issuing a final ultimatum that is ignored.
The man goes back to his apartment and replays this scene, alongside visions of happier times in the now-ended courtship.

Cursorily, this hardly differs from the usual teens-in-crisis scenario played out in hundreds of songs, but in the hands of Gene Clark, still in the thrall of his extended Dylan-worship, one can be certain that wordplay, imagery and multiple viewpoints (extracted from characters and speakers closely tied to the situation or not) will transform a mundane scene, such as the one described, into a surreal experience of loss.

Beginning cold with no intro, Gene and band launch headlong in the song and proceed to establish a mood somewhat akin to the stately sound achieved in ‘Echoes,’ but with a slightly quicker tempo, and minus the orchestral arrangement. The first and third lines recount the female lover’s side of the story, while the second and fourth reflect his responses:

“You say it’s all your imagination
Should I just stand here or bury myself in your floor?
You say don’t add to my frustration
Well, I didn’t intend to linger at your door.”

The most interesting aspect of these lines is that we don’t know what “it” represents. Reading between the lines, and knowing something about Gene’s complicated personal life in this period, one might infer these lines as references to the endgame of Gene’s doomed affair with Michelle Phillips of the Mamas and the Papas, and its attendant guilt and paranoia.
Gene’s voice during “his” responses in lines 2 and 4, which John Einarson referred to as “a falsetto verging on a yodel,” is rather unsettling in its naked emotion, perhaps even emasculating when compared to the resolute, no-nonsense delivery of “her” lines of admonishment in 1 and 3. The defensive, almost diffident, posture he assumes indicates conflicting elements within, as well as a lack of control of the situation without: his presence at her door shows a willingness to continue the affair, but his self-effacing image of burying himself in the floor furthers the idea that he is not going to be the one who decides the fate of the relationship.
(0:00-0:33)

At this point in the song (0:33-1:18) there is a sudden breakdown in which the drummer hits dramatic snare-crash accents on the first and third beats, and we hear for the first time, creeping underneath it all, that haunting mellotron motif:

“Blackboard explanations
And trial examinations
And temperature,
Relations on the moon
The streetcar of invention
An afternoon of slight intention
The effects of some strong lesson learned too soon.

‘Too late,’ cries a melting, lonely snowman,
‘Forget,’ reminds a blackbird taking wing,
‘Tomorrow,’ whisper voices in the darkness,
But the days go slowly moulding past my door.”

The mellotron lends an eerie emotional depth to the song and gives us some indication of what an ‘Echoes’-style production job could have achieved had Gene seen fit to see it through to fruition. During the breakdown section Clark laments the hot/cold nature of relationships (“temperature/relations on the moon”) amid the process of a break-up itself, wherein the party initiating the break-up offers carefully thought out reasons (“blackboard explanations”), as though in a teacher-pupil dynamic, pitted against the rejected party’s counter-argument (“trial examinations”).

When the tempo resumes its gloomy ‘Echoes’-style pace, the rejected male suitor is left bereft and offered the typical advice one receives when dumped: It’s too late, forget her, tomorrow will be better, you’ll meet someone else. But the images offering such counsel are mocking him even as they offer their advice: the snowman melts, the blackbird reminds him to forget her, even as it too flies away, and voices without substance provide empty platitudes about tomorrow being another day. Back in his room, time has not only stopped, it has begun to mould, and as the rest of the world moves on, he is locked in a moment of happiness which is described in the next section of the song (1:18-1:46):

“Took a walk with you
The clouds were blue on the bottom
And white on the top
Saw that one day could show
I wish that I would never have to stop.”

A crisp snare drum fill propels us into the narrator’s blissful remembrance, which is carried upon a fast-paced Merseybeat-style rhythm. Think 1964-era Beatles with hacking, choppy guitar parts featured in songs like ‘She’s a Woman’ and 'Getting Better.' Gene’s voice is a little feeble here, as though he hadn’t yet decided how he was going to approach this particular section of the song. He sounds tentative, and a little frail; he wavers on notes he should be hitting dead-on for maximum impact. But remembering that our narrator himself is tentative and a little frail, this may have been deliberate.

The reverie quickly ended, we are just as suddenly catapulted back to the scene of the argument that started the song, and the now-familiar, ominous-sounding snare-crash breakdown and mellotron flourishes(1:46-2:36):

“Up the walk cry vendors
Mrs. Black never remembers
Finally she goes screaming through the night
Apartment house conceptions
A girl who paints deception
With the blurred out recollection of the light.
‘Stop her,’ slurs a constable in denims
What dare relates the viewer from the blind,
‘Whenever,’ says the upstairs Angelina
But the days go slowly moulding past my door."

As the argument has now spilled into the street we are introduced to some of the other apartment dwellers: Mrs. Black, Angelina, an unnamed character peering through a window (with a nice play on words, to boot: “viewer”/“blind”). The slurring “constable in denims” may be a reference to Clark himself, remembering the occurrence after the fact, looking upon himself as merely a sad character in a drunken melodrama. And once again, back in his room, the moments are locked in time with no future and no past.


The song's final four lines echo its first four (with a subtle variation: “all your imagination” becomes “only imagination”) (2:36- 3:09):

"You say it’s only imagination
Should I just stand here or bury myself in your floor?
You say don’t add to my frustration
But I didn’t intend to linger at your door."

Presumably Clark wanted to bring the song full circle and end as it began. It also serves as a bit of ironic undercutting to have our narrator reiterate arguments which have already been made moot by his lover’s decision to end the affair, thus exacerbating the feeling of being trapped in a moment which is replayed in his mind ad nauseam.

But the song is not over.

The haunting mellotron theme---similar to the mournful mood established in Dillard and Clark’s ‘Something’s Wrong’, but much eerier---forms a repetitive, hypnotic structure which serves to replicate the narrator’s frozen-in-the-time consciousness (3:09-4:24). The drummer adds a military style snare backing for the initial stages of this section (somewhat akin to Mitch Mitchell’s playing in ‘1983 (A Merman I Should Turn to Be)’) but soon grows more aggressive in his fills, as does Gene on his acoustic guitar. Over and over they repeat the theme—indeed, for over a minute it percolates---the intensity building with each pass. The drummer’s accents gradually shift into aggressive snare-to-crash rolls, while Gene’s quick acoustic strums (surely some of the the most forceful strumming of his career) accentuate the drum fills in a style somewhat reminiscent of Tommy-era Townshend. Indeed, the effect of this section is entirely Who-like, eventually building to a climax upon which the song abruptly ends.

‘Past My Door’ needed a producer who could have sifted through the many ideas on display to create more focused song. The transition into the rock section needed some kind of production touch to make it more seamless, less gratuitous. The lyrics are far too wordy to have ever made it a hummable hit, but I daresay there still exists the bones of a Great Lost Gene Clark Song here, especially in the mournful Chamberlin/mellotron sections, the disarming vulnerability imparted through Gene’s vocal, and, as always, the underlying meaning in his words.
Email Post

ge said…
what?? Gene C & Mellotron in the same sentence/song? to some that would be nowheresville but the psych-era lover in me thinks that sounds g-r-e-a-t!
It is surreal-unideal to have this explication never havin' heard the song but i'm sure you have your reasons! and any Gene fragments or criticism are welcome
13 October 2008 at 16:43

The Clarkophile said…
Hi ge,
As you can probably tell, I have a deep fascination with this period of Gene's career. Obviously I'm unable to post the audio portion, but I think a large measure of satisfaction may still be had from simply reading Gene's lyrics---which, I should point out, up until my transcription and subsequent posting of them here in my blog, have been under wraps for over forty years!
Thanks for reading and leaving a comment.
13 October 2008 at 18:04

aldo said…
FASCINATING STUFF!
Great work here...it was certainly a very interesting time in Gene Clark's career and for many of us one that has been gone almost unnoticed...I would love to hear the recordings you wrote about and I'm a bit surprised that those songs have not shown up officially as yet...
Thank you!
27 November 2008 at 12:28