Skip to main content
Posted by The Clarkophile November 15, 2008

My Held-Back Pages: Into the Vacuum of Gene Clark Sings for You, Part 3 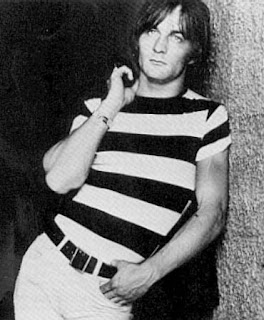 This blog was created for the purposes of promulgating my belief that Gene Clark was a writer of consequence, and, in a more personal sense, identifying, clarifying, arranging and satisfying in my own mind what I perceive to have been recurring images and themes in his body of work (e.g. the Sea, the name Marie, et cetera).
When I first heard 'Down on the Pier' it felt vaguely familiar---not for the reason that it is reminiscent of any other song (which, oddly enough, it is; more on that later), but because the image of a newly broken-hearted individual waiting in vain for his lover on a pier seemed so quintessentially Clarkian. I felt like I had been somehow transported back to the day I posted my first entry on this almost year-old blog, wherein I discussed 'Kathleen' from Gypsy Angel. That two songs written twenty years apart could share such similarities speaks volumes about how deeply the spectre of loneliness and despair informed Clark's muse: The musical styles may be completely different, but the commonality of vision and tone remains.

In many ways, the lyrics of ‘Down on the Pier’ resemble a continuation of the narrative begun in ‘Past My Door’ (discussed below). 'Past My Door' traced the course of a relationship from its happy beginnings, through the climactic argument that ended it, to the period of private grieving immediately afterward; 'Down on the Pier' chronicles the aftermath of that break-up; the bewildering vacuum of zombie-like purposelessness which descends upon any individual following the dissolution of a meaningful relationship: it is the time of regrouping, of reluctantly re-establishing oneself as an individual entity.

Like the other Sings for You material I’ve had the distinct honour of hearing, the song begins rather tentatively (Truth be told, I think these songs were recorded without the slightest bit of rehearsal; these musicians are clearly winging it): Gene plucks a brief acoustic introduction to which the drummer adds a throwaway ting on the bell of his ride cymbal for effect. Gene switches to waltz time, which prompts the drummer and bass player into making a couple of feeble attempts at locking in, before they finally settle into a comfortable rhythm.

I see you say to yourself
You’re causing yourself your own misery.
Playing the game of minds
Expecting to find ‘bout how it should be.
I think you should know, as much as it shows
That baby I see.

Two things are immediately apparent: Gene’s acoustic guitar is horribly out of tune, and the melody and phrasing of this song bear an obvious debt to Dylan’s ‘4th Time Around’ (Itself a piss-take on Lennon’s ‘Norwegian Wood'...but that’s another story altogether).
Initially this was the cause of much disappointment for me, because throughout Gene’s period of obvious Dylan worship he had never stooped to anything that even remotely resembled thievery; unusual, original melodies had always been his strong suit (‘Only Colombe’ notwithstanding). This is not to suggest it is in any way an instance of overt plagiarism; let’s just say it’s fairly apparent Gene was listening to a lot of Blonde on Blonde.

The chorus, however, is much better, and it’s obvious in hearing it how wonderful it would have been had McGuinn and Crosby been able to provide harmonies on the words “here” and “pier”:

But I’m here, down on the pier
And you’re never here,
There’s no one but me.

The sudden entrance of the calliope at the beginning of the second verse was an initial cause for pause. What was he thinking? Is this a gag novelty song? The combination of waltz time with an instrument closely associated with a circus atmosphere feels wildly incongruous, not at all like the Gene Clark we all know and love.

Down on Cumberland
Words just wonder through friends and then back to me.
While still in Heartbreak Hotel, Diana and Stell look out for the free.
The thieves all dying of shock to find that the lock
Does not need a key.

While I’m here, down on the pier
Not one will come near,
There’s no one but me.

If the reference to a streetcar in ‘Past My Door’ hinted that particular song was set in San Francisco, then ‘Down on the Pier', from its very title to its name check of Cumberland Street, confirms this suspicion, and, by extension, accentuates the feeling we are dealing, in the latter, with the aftermath of the break-up introduced in the former.

Seeking solace in the comfort of friends is typical behaviour after a break-up; our narrator chats with friends on the street, inquiring about his ex and her activities, leading to the most extraordinary line in the song: “Words just wonder through friends and then back to me.” The idea of wondering words, travelling through air like hopeful missives, is a fascinating, and typically Clarkian, use of metonymy. Doubtless his wondering words concern his ex; but the wondering words of his friends’ only concern his welfare, which is confirmed in the next line: “While still in Heartbreak Hotel, Diana and Stell look out for the free.”
Presumably Diana and Stella are two platonic female friends who have taken it upon themselves to find another girl for him.
The line about thieves dying of shock might be a non sequitur of sorts, but a better bet would be it was designed as an image to convey the abject vulnerability of our narrator: He is unlocked, open; susceptible to anything and anyone.

It is at this point in the song that a strange and unexpected thing happens: the calliope no longer creates a mocking, circus-like atmosphere; it has been bent to the mournful will of the singer. It has become an intrinsic element of the song's emotional core.

While wandering aimlessly down the streets of San Francisco, he occupies himself with thoughts that he’ll magically bump into his ex, before finally coming to terms with the real purpose of the walks:

Uptown I still look around
I think that your face is somewhere to see.
But you, you don’t show, I don’t think you know
Where I think you should be.
And after windows on end, and the hours I spend
On a loneliness spree.

The final verse features some overtly Dylan-inspired internal rhyming “overhead”/“bed”, but is in itself a remarkable image to capture the essence of loss as reflected in the smallest of details, like crumbling plaster reminding him of intimate moments in happier times:

Some days I sit and wait for the sun
to come down to me.
While plaster breaks overhead and falls in my bed
Where I wish you could be.
I’m trying to think of the tune that ran through my mind
While I walked by the sea.

But I’m here
Down on the pier
You’re never here
There’s no one but me.

But all roads lead to the pier. What is its significance? Was it formerly a meeting place favoured by the estranged lovers? A potential location for his suicide? Difficult to say.

But like ‘Kathleen’, there is abject heartbreak, stubborn hope and an endless, obsessive, all-consuming vigil in vain.

In both instances, the lonely wait takes place by the sea.

Next installment: Another Sings for You track.
Email Post

bdb said…
Quite delighted to imagine from your elucidating appraisals something I may never hear but probably will one day.
I enjoyed reading and wondering about the lyrics for All I Want, and You and I, long before I heard the melodies, which certainly did not disappoint.
Would you be in a position to write a chronological list of GC's compositions with an annotation of the significant alternative renderings?
21 November 2008 at 10:02

The Clarkophile said…
Hi bdb,
Thanks for reading/commenting.
That sounds like an interesting assignment, but I think it's a little beyond my means at the present time.
21 November 2008 at 15:07