Skip to main content
Labels
Posted by The Clarkophile May 24, 2010

'In a Misty Morning' 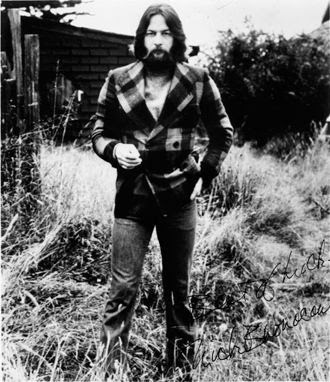 IN A MISTY MORNING

On Saturday, May 25th, 1991, at approximately 12:30 on a rainy afternoon in London, Ontario, I sat down at the kitchen table of my second floor apartment house on Princess Ave. to eat my lunch. Spaghetti leftovers. I'm pretty sure I was hungover.
It almost seems quaint to say this now because I never do it anymore but I listened to the radio on as I ate. The hard-news headlines were read first, followed by the teasers for upcoming segments.
“And, coming up in entertainment news, an original member of the Byrds has died.”
“Gotta be Crosby,” I thought rather smugly. Odd though that they didn’t say “An original member of the Byrds and CSN has died.” After all, Crosby had been in the news regularly throughout the ’80's, and for all the wrong reasons. It was not for nothing he seemed the likely candidate. Drugs, guns, DUI, incarceration: who else could it be?
So it was akin to a sledgehammer’s blow to the gut that I took in the news about Gene. I sat there stunned, paralysed in abject shock. Maybe they got Clark mixed up with Michael Clarke? Could be, you never know.
Other shock-inspired rationalizations followed before the gloom of acceptance sank in.

I hadn’t felt this depth of sorrow since Lennon was murdered. But with Gene it was much different. It was grief inside a vacuum. Inside I was ripped apart, yet there were no interruptions of regularly scheduled programming to facilitate the airing of hastily prepared television specials; no Gene Clark marathons on the radio; no impromptu public gatherings of teary-eyed fans clutching handmade signs asking Why?
There was none of that. In those pre-Internet days there was only myself. I suppose it was fairly predictable, a little cliché, to want to listen to Gene’s music at this time. But one must also understand it was something I did every day anyway. Only it was different now. But what song?

In April 1972, Gene Clark entered the studio to record tracks for the projected follow-up to White Light, but, as we all know, the sessions were aborted before the album was completed. Of the eight songs finished before A&M put the kibosh on it, the philosophically evergreen ‘Full Circle Song’ and the solemn, cinematic ‘In a Misty Morning’ would emerge as the standout songs when the album was eventually released, after the addition of other tracks, as Roadmaster.

Lyrically, ‘In a Misty Morning’ focuses upon a discrete moment in time after some unknown personal catastrophe (this is Gene Clark, so we’ll assume it was a woman---it’s always them wimmin’). Our narrator arrives in a new city and immediately experiences acute spatial and emotional alienation: things are no longer as they were; nor have they settled into what they will become. Gone, at least temporarily, is a sense of familiarity with faces, surroundings, routine. Whether by his own design or at the whim of another, he is thrust into a zone of transition, effectively caught between a rock (the past) and the hard place of the unfolding unknown.

Within this sphere of displacement and alienation, however, comes heightened sensitivity and awareness. I have deliberately posted the full lyrics to the song at the beginning of my piece because it’s important, I think, to recognize just how much detail Gene was able to effortlessly cram into less than twenty lines.
The song unfolds like a short film, and contains stunning richness in its evocation of everyday occurrences/experiences to provide evidence of this heightened awareness.
One may reasonably conclude, however, that this awareness is entirely present-based. What descriptions we get of the past and future are tellingly devoid of similar detail. Sketchy, mysterious allusions to the past (“memories of the days I had left behind”) correlate with similarly vague notions of the future(“hope that better days were always there to find”).
Consider the astonishing details that lend clarity and immediacy to this particular moment: we know the day and approximate time on which the events take place (“Monday morning”); we have an idea of the metropolitan location of the action (“tall buildings”), we know the weather conditions (“the streets were wet, it had just been pouring”); and we are given a sobering jolt of reality which possibly alludes to paranoia resultant of drug use (“I trained my eye on a police cruiser/I watched and I gulped as he passed me by.”)

Amazingly, all of this information is gleaned in the first six lines.

Such intense precision in describing the present—particularly the inherent vulnerability of gulping at the sight of a cop—juxtaposed with such vagueness in describing the past, or apparent inability to relate plans for the future, creates a sense of immediacy: This is a defining moment in his life. This is his sea change.
The payoff line, which serves to unify the solemnity of the present with the wounds of the past and the irresolute nature of the future, arrives in a moving use of pathetic fallacy as an expression of sorrow covering all: “Like the clouds above the storm just had to cry.”

I chose to play ‘In a Misty Morning’ on that bleak, rainy Saturday afternoon in May, 1991, when the clouds hung so impossibly low, on the day when I found out Gene had died. For nineteen years I was unable to answer the question as to why I chose this song over any other.
It was only recently, when I sat down to write this piece, that I came to the realization that what I learned on May 25th, 1991, catapulted me into a predicament similar to the one suffered by the narrator of the song: I was caught between what had been and what would now be. Perhaps I too felt a heightened sense of awareness, inasmuch as I can still see myself sitting down to eat lunch on that misty Saturday, I can still hear that radio announcement on FM96, and I will still literally gasp for air whenever I remember being sucker-punched by the shock of it.

And after lunch I went for a walk in the rain. As I walked, I went inside this song for solace.
Email Post
Labels: Roadmaster In a Misty Morning May 24

The Clarkophile said…
Thank you, Sha.

And I promise, this is the only time there's going to be anything about me in the blog--it wasn't created for that purpose.
But on this occasion I made an exception.
24 May 2010 at 17:47

Modern Otter said…
Very good analysis, Tom, and one that makes me appreciate the song even more than before.

In recent years (let's say post-9/11, because I suspect that's the crux), I have become increasingly distressed at trends in songwriting in areas where I've been in the habit of paying attention--pop, mainstream country, and bluegrass. What I'm hearing too much of are appeals to nostalgia and sentimentality, couched in way over-specific detail of story, like "I remember so well riding in my dad's '66 Impala with the speakers in the back" (or whatever). Your piece reminds me why I have Gene Clark to credit or blame as the standard against which I appraise songwriting, and nobody did what I recall one writer referring to as "studied vagueness" better than Gene.

ge said…
yeah, a vagueness or ambiguity---I just tried a version of this song and in the process of singing, noticed that Like the clouds above the storm/ [I]
just had to cry
an 'I' is unspoken but implied
['clouds don't really cry, do they Mommy?']
puns---poetry--genius---schizophrenia---humor---ambiguity---paradox are related, and employed by the best lyricists to play in our minds freshly for years.

Jamie said…
I was just turned on to this site, and to obscure Gene Clark songs
(at least obscure to me) a couple of days ago. I'm a musician, guitarist, pianist, singer-songwriter so my interest is on multiple levels. I'm a Byrds freak and David Crosby devotee.

Johan said…
This is my favorite Gene Clark song:

Johnny Blades said…
Yes this is an apt analysis.

He's one of the best kept secrets.

I think it was a purple period for Clark. A master of melancholy.

skipway said…
What a great rumination on the day Gene passed and such a cogent analysis of In a Misty Morning, Tom. I had a similar devotion to Richard Fariña and his music and songwriting, and I had a similar experience on May 1, 1966. I was about to leave the house to head to a bookstore in the North Beach section of San Francisco to get an autographed copy of Richard's debut novel.I reached to turn of the radio when an announcement came on that Richard had been killed in a motorcycle accident the night before. I was in a daze of sorrow and disappointment, which continued for days. Richard was but 29--such a loss. I went and bought the book anyway and hung out in North Beach where the Beat poets had congregated--a fave haunt anyway.

Back to Gene--I was searching for new photos for my Gene videos when I came across the photo at the top of your blog, and of course I had to read it. Glad I did!
8 July 2018 at 20:23

Unknown said…
Thank You for this wonderful piece about one of the most absolutely stunning songs in the history of song writing. One of the most talented songwriters to Grace this Earth. Thank You, once again.
15 May 2019 at 10:09

Thai Times said…
I love both examples of Misty Morning found on Youtube. Apart from the Roadmaster studio song there's an acoustic live version from 1979. Wonderful singing of a lovely tune by Gene.
24 May 2019 at 19:57