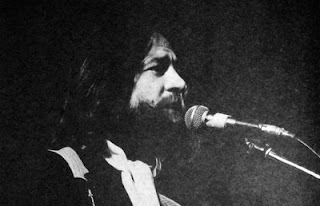 The post-No Other period is usually thought of as the Gene's extended fall from grace; a 16-year period of artistic decline that played out in an ignominious descent from major label status to -- well, the horrors of the Cinegrill in April 1991.
It has long been the mandate of this blog to refute that opinion...with extreme prejudice.
Of the myriad reasons one may be thankful for the recent announcement of the forthcoming reissue of Two Sides to Every Story, the possible emergence of bonus material is truly a cause for celebration.  It's all benefit of hindsight, of course, but when one considers Gene ditched already penned aces like 'Wheel of Time' and 'What is Meant Will Be,' the decision to rely on so many covers is inexplicable.  Indeed, as I'm sure I've said here before, I've always felt the failure of No Other threw Gene into an extended period of creative self-doubt.  He would routinely pick covers of dubious quality --  (cf. 'Mary Lou' from Two Sides, 'Vanessa' from Firebyrd) to the detriment of superior material by his own hand ('Crazy Ladies', 'Last of the Blue Diamond Miners').
It's difficult to know where 'Taken By Surprise' fits into all of this.  From Einarson's invaluable Mr. Tambourine Man, we know the song was performed by Gene and Tommy Kaye with the ragged-but-righteous KC Southern Band.  But it is not listed among Gene's published works, which begs the question: who wrote it?
My guess is it's a co-write.  Lyrically, there aren't any obvious Clarkisms---there is no complex imagery,
no metaphysical puzzlers to consider.  That said, one must consider the post-No Other Clark had largely abandoned the cosmic questioning that characterized his masterwork, in favour of simpler, would-be radio-friendly tales of love and loss ('Release Me Girl,' 'Something About You Baby').  The tendency to view songwriting as workmanlike craft as opposed to poetic expression of soul would be the chief conflict in Gene's writing from this point forward.  (But who could blame him for wanting to appeal to the masses and re-establish himself as a writer of hits?)


And what of the music?  Well, put succinctly, 'Taken By Surprise' is a slow-burning gem.  Obviously featuring the Three Byrds Land in London personnel, the backing feels like a sloppier version of Zuma-era Crazy Horse.  Featuring massive duelling guitars (FACT: the KC Southern Band was the heaviest band to emerge from the Byrds family tree), the song begins with a riff which sounds uncannily like a slowed-down take on Ringo's 'It Don't Come Easy.'  It's a five minutes-plus guitar fest, interpolating the crunchy sound that characterizes the KC Southern's Three Byrds Land set --- but cleaned up some, like a newly shaven saloon habitue in a fine new suit.


The big difference here is Gene's singing.  On much of the live KCSB material, Gene adopts his regrettably generic "Southern Rock" voice (epitomized in his pronunciation of "Kansas City Suh-thren"
---ugh).  Here, however, it's pure Gene Clark.  As the backing gets heavier, rockier, Gene's voice does not.  Thankfully, he does not trot out the gravelly affectation that makes the Land in London version of 'Kansas City Southern' so unlistenable. That is not to say he's laying back and going through the motions.  It's a tremendously moving performance, one of controlled intensity in which sensitivity triumphs over bombast.
So is it a Gene Clark original?  As stated, my guess is it's probably a co-write with Tommy Kaye.
Does it matter if it's a Gene Clark original? With a vocal performance as moving as Gene gave on this occasion, the answer is no.
It will be a great shame if 'Taken By Surprise' is not included as a bonus track on the upcoming reissue.  But if it is, you'll excuse me if the first thing I do is check the writing credits.
Email Post

Don Thieme said…
Great review, although I think that I disagree with you about the "heavy" vocal sound Gene adopted with the KCSB. I only have one version of the song "Kansas City Southern" so I am not sure whether that is the one that you describe here or not.
3 March 2011 at 09:19

Brian Nash said…
I always though "Release Me Girl," particuly as performed in the "3 Byrds Over London" concert, to be among Clark's greatest gems. The version that McGuinn-Hillman-Clark put out is "commercial," and it's upbeat tempo belies the pain and suffering the song describes.

I saw Gene twice in the period between "No Other" and "Two Sides," as I was living in Mendocino County at the time. The first time (December, 1975) he was backed by a group called, I believe, the Roadmasters (or something similar). When I saw him in October, 1976, the group backing him was called The Mendo Rhythm Method, and I believe that group included Tommy Kaye, though I am not sure. Neither of these groups get mention in Einarson'b book, and it seems a "lost period" in Gene's musical career. Both groups were good, and the second one did a tantalizingly slow version of "Eight Miles High" that I remember to this day. They also did Fats Domino's "Bol Weevil" twice, which was hard to wrap my head around.
23 April 2011 at 15:43