Skip to main content
Posted by The Clarkophile June 04, 2011 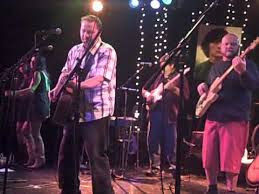 It’s often the case that musicians—who also happen to be the children of famous rock stars—try to avoid direct association with their parent's material (one doesn't see Jakob Dylan pulling out 'Absolutely Sweet Marie' in concert).  Presumably, this arises out of an understandable desire to be taken seriously in their own right.  But attempting to disassociate and distance themselves from their parents' accomplishments asks for a willing suspension of disbelief, wherein the listener is expected to forget who that person's father is, regardless of similarities of look, mannerism or stage presence.
Not so with Kai Clark, one of Gene Clark's two sons. As evidenced in his band's April 29th, 2011 performance at L.A.'s Roxy to promote High Moon's re-release of his father's misunderstood 1977 album, Two Sides to Every Story, Kai openly embraces his father's music.  On that night, Kai and his band, along with some special guests, performed the album from start to finish.  Kai also dug into a selection of songs either written by, or closely associated with, his father.  And with a giant photograph of Gene Clark in his '60's prime literally watching over him, Kai performed his father's music with palpable exuberance and pride.
And it didn't stop there.  Adding to the bittersweet nature of the evening, Kai was joined onstage by the members of the Gene Clark Group [Joel Larson, Bill Rinehart, Chip Douglas], who had last played together some 44 years ago.


SPECIAL THANKS TO KAI CLARK
Also from the Two Sides to Every Story release party at the Roxy:
Home Run King
Lonely Saturday
In the Pines
Kansas City Southern
MaryLou
Email Post

Sha said…
It's interesting he says that his father's music grew on him. I had a similar experience with Gene's music. It took me a while to get into it but then it opened up a whole new world of music to me!
6 June 2011 at 14:53

Janis Rebecca said…
I enjoyed this insightful interview with Kai Clark. His father's music has been lurking in my own being for so long and it is nice that Kai is forthright about talking of how his Dad's music has made an impact on his adult life and his own music.
24 November 2012 at 13:23

lost_jewels said…
Hi Tom, Great stuff. Thank you for beeing such a good questionair to bring out Kay's true feelings. Loved it. Thank you very much.
16 March 2013 at 08:02