Skip to main content
Labels
Posted by The Clarkophile September 23, 2011 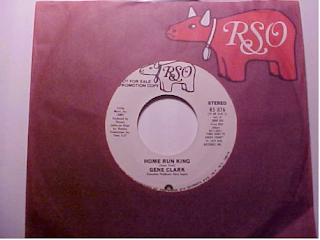 From City to Country to City: 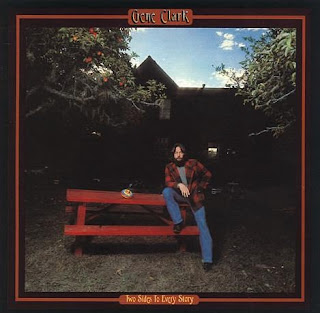 In terms of Gene’s post-1977 career, I have often referred to this review as delivery of the coup de grâce.  Never again would he be signed to a major label as a solo artist.
Tommy Kaye bears a certain amount of blame, for sure.  Whether hampered by cocaine burnout or late-‘70s L.A. ennui (or both), Kaye was unable to coax anything resembling spirited performances from the musicians.  Nelson was partially right: some of the tracks are plodding, but others, like ‘Hear the Wind’ or ‘Past Addresses,’ simply required a more muscular approach; more oomph from the players – more backwoods soul.  In some cases, a less morose, slightly quicker tempo, would have worked wonders.  The bones of a great album are there, but some combination of crucial decisions – involving everything from musicians to song selection – had a deleterious effect on the results.
But it was Gene’s inability to get past the failure of No Other that also contributed his undoing.  His obvious doubt in his own skills as a composer led him to record three covers, plus an ill-advised remake of one past glory (which presages the formula later employed on 1984’s Firebyrd: ‘Mr. Tambourine Man,’ ‘I’ll Feel a Whole Lot Better’).
Another brief aside…
Imagine a confident Clark entering the studio with the Silverados (augmented by keyboard player and drummer) in late 1976, early 1977.  Consider the attractiveness of this particular line-up, recording an album with this running order:
Side 1
Home Run King
Lonely Saturday
The Daylight Line
What is Meant Will Be
The Wheel of Time
Side 2
Sister Moon
Hear the Wind
Past Addresses
Silent Crusade
Glib summation: Once a home run king himself, the failure of Two Sides To Every Story sent Gene packing to the minors posthaste.
But it’s only with benefit of hindsight that we may propound these theories about what happened to Gene, or second-guess what he should have done.  It’s likely he did not analyze matters as much as I have herein, and was simply trying to do the best he could to survive.  He might even laugh at a term like “backwoods gothic” (then again, he might have appreciated someone taking his music this seriously).  And who are we to judge?  Two Sides, even with all its flaws, still has moments of brilliance.  In places it is as moving as anything he ever wrote.  We ought to be thankful it’s being re-released.
In a world where you’re either just reporting the accomplishments of others (like a newspaper boy) or you’re the heroic achiever himself (like Babe Ruth), Nelson got it wrong in the vicious kiss-off line in which he compared Gene to the former.
After the failure of his masterpiece, Gene’s punch-drunk ego was almost certainly near collapse.  But what Nelson failed to grasp is that even if one is no longer a home run king, it is a designation that cannot be taken away.  Even if the Babe strikes out at the bottom of the ninth, run one behind, two out, with a man on third, he can still claim to have achieved what others can only fantasize about.  In the end, he’s still remembered as a home run king.
From here on in, there would be no more home runs, no signing bonuses or lucrative
commercial endorsements.  But for those who followed his career as it slid into the minors, there was still a series of doubles and triples yet to be heard from Gene Clark. 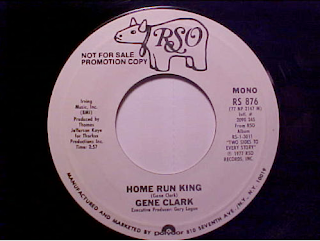 Anonymous said…
Nice article! I must agree that the Silverados would have made Two Sides a much better album. Listening to their live verions of "Life's Greatest Fool". "The True One" and even "No Other" is a real treat. And "In The Pines", "Home Run King" and "Hear the Wind" have so much more energy and brio than comes through on the album.
23 September 2011 at 16:39

david said…
Have to agree with the prior post. "Two Sides.." should have been titled "Two Slick", although that title could have been used for "No Other"( I'm not a fan of the production there either).I think some of Gene's best songs were left off "Two Sides",as the live tapes bear this out, and as well as better arrangements of the stuff they did use. In my humble opinion, TJK hurt Gene more than he helped him. One other point totally off topic, is the horrid artwork on "No Other". That did Gene no favors at all, espescially the photos of him in drag..YUK!
Just found your site and it's really fantastic.Is there anything we can do to get some of Gene's unreleased stuff out? Read your interview with Kai: seems he's not too interested in putting Gene's stuff out.Been a Byrds/Gene fan since '65.
19 October 2011 at 22:15

paolo said…
ciao clarkophile, my name is paolo and i'm contributor of italian fanzine "late for the sky", i write to tell you about our newest issue, dedicated to gene clark.
is a 12 page special with reviews of his records, an interview with kai clark, a contribution from sid griffin, two italian translation of his songs, discography, contributions from chris hillman, cindy bullens, herb pedersen, john york and al perkins...
here is our link.

i can send you a pdf of the special if you give me an email address....

ge said…
that Paul Nelson who died in '06 had a book published recently of his collected stuff! We wonder if he had no other positiver Gene takes??
31 December 2011 at 12:10

The Clarkophile said…
Thanks Andrew. I appreciate it.

First of all, it's nice to see a blog about Gene Clark. As a French fan, I don't find that many people I can talk to about his music. In the circles of my music fan friends, he remains largely unknown, although I do what I can to make them listen to him...

Anyway, "Two sides..." is a special album for me. I bought the vinyle (not so found about re-editions... !) when Gene was already established to my eyes as one of my favorite, if not my favorite, singer and writer. That might sound elitist, but I always secretly liked the fact that while my friends were endlessly talking about Dylan or Keith Richards, I was left with Gene Clark as a true hidden gem. It got to the point were his music became too familiar to me. Then, I purchased "Two sides...", long after "No other", "White Light", "The LA sessions", "Roadmaster", "Firebyrd" and "silverado 75". And it was a nice and gentle punch on my shoulder. It sounded fresh and different. Natural, not over-thought, not intellectual. It flattered my early love of 'roots' music. I probably appreciate this album more than the others because of this raw energy, its natural roughness. The reason I suddenly needed to buy it was "In the pines", a song I loved before, and love even more now thanks to Gene Clark. When the LP started spinning I though "What is this ?", then I sat and I enjoyed it, I felt like I was rediscovering my favorite artist. The same day, I left the LP at my parent's house and my father listened to it. He's more into Pink Floyd and stuff and usually hate that kind of 'roots' music. He said : 'Well, that's pretty neat !'. He heard it too, that natural, rough, sound. In the end, I would probably defend with more passion this album than any other by Clark. It's weird in a great manner. I love it !
2 September 2012 at 14:33

Indigo Mariana said…
That's the first time I read that scathing review of Two Sides (I had heard about it), thanks for including it here. It's funny how when the album was re-released they had this to say: http://www.rollingstone.com/music/news/exclusive-listen-lost-gene-clark-classic-kansas-city-southern-20110701
(I never went by what Rolling Stone says anyway - they're like the Time Magazine of music for me.)

I get the feeling that Gene put his trust in Tommy Kaye on Two Sides and let him lead the way (for better or worse). There are some really good moments on this album, but I do think it could have benefited from a little more "oomph".

As for No Other - I always felt that either Silver Raven or From A Silver Phial could have been the singles, seems like those would have been the most "commercial". Was there ever a single planned for No Other? I could never understand why Geffen would let the album shrivel up and die instead of trying to recover some of that $100,000 and why it was much more of a thorn in his side than Bobby Neuwirth's (!!) album which I understand cost twice as much! Makes no sense to me. I feel like there's something more to that story. He had to have known that Gene wasn't exactly top 40 material.
11 May 2015 at 18:42