Skip to main content
Posted by The Clarkophile June 19, 2018

Interview with The Clarkophile re Back Street Mirror E.P.

In my previous post, I mentioned Australian writer/musician Christopher Hollow, whose deeply engrossing 2004 interview with Chip Douglas set in a motion a decade-long quest—one that, for all intents and purposes, was finally resolved with the release of the Back Street Mirror E.P. on Record Store Day, 2018 (and now available in general release directly from Sierra Records).

While in the process of writing a review of the BSM E.P. for Rhythms, an Australian music magazine, Chris asked if he could pose a few questions to me about the material on the E.P., and I happily obliged. But to be perfectly honest, the process was a little awkward for me; this was the first time anyone had interviewed me about Gene.  Usually I'm the one who's asking the questions, not answering them, so I was a little nervous about it. 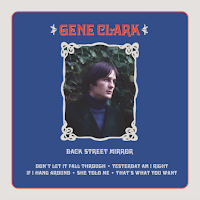 As it turned out, I needn't have been nervous, as my Clark-inspired garrulousness ensured the interview would not run in full.  So I asked Chris if he would mind if I posted it here, and he kindly said yes.

What do you hear when you hear these tracks?

I hear fearlessness; a willingness to try anything.  There's a deep commitment to experimentation in these songs that far too many people have dismissed as failures and misfires. McGuinn and Crosby always seem to get name-checked as the innovators in The Byrds, but Gene Clark should be celebrated as a true visionary in his own right.  One need only look at this E.P. to see the ways in which he reconciled seemingly disparate genres. Take 'Back Street Mirror,' which I like to call the sister track to 'Echoes.' Obviously Gene was deep in his Dylan obsession at that point—as he would be for the remainder of 1967—but it's the juxtaposition of his Dylanesque phrasing with the glorious chamber-pop backing that, for me, makes it, like 'Echoes,' a masterstroke. Dylan couldn't have gotten away with it.  But there is something stately, soulfully dignified in Gene's approach.  Forget the Dylan impersonation for a minute, and just listen the commanding presence—the gravitas—in his voice. That's why I wish there had been a full scale chamber-pop LP made after his debut. He flirted with this direction, when I think he should have fully committed to it.

But then Gene never stayed in one spot for long, and must've grown disenchanted, either with the sound itself, or Columbia's indifference to the direction.

With 'Only Colombe', 'Yesterday Am I Right,' and many others from the period, one can almost create a lost baroque album from 1967—Gene Clark's version of SMiLE.  This difference here is that I doubt whether any such project was planned, and most of the tracks were abandoned (by Gene) or rejected (by Columbia).

Elsewhere, 'She Told Me' is like the blueprint for a great power-pop song.  It's all there: the riff, the breaks, the rhythm.  I hear a song like that and instantly I'm hearing guitars, drums and voices that aren't there.  It would have been an absolute gift to the Byrds, or any other group.

There is a very specific reason why I suggested that the E.P.’s final track should be its earliest-recorded song, 'That's What You Want' (copyrighted in late 1965 while Gene was still in the Byrds). It's the earliest song in the set, yes, and yet it's the most forward-looking of the lot, at least in terms of the way in which it presages the sound Gene would pursue six years later on White Light. It's a deceptively simple song, one that I fear some will give the short shrift. I've already seen comments online like "It's easy to see why the Byrds rejected that one."  Well, that seems rather presumptuous to me.  In truth, there is no proof Gene submitted the song to the band for consideration.
If they did reject it, then, quite simply, they were fools.  Take a listen, get inside the song: it's a harrowing tale of romantic servitude and self-abnegation, contrasted by a partner's open indifference to—and simultaneous reliance upon—those same qualities. And Gene Clark was 21 when he wrote it.


Both personally and career-wise, 1967 has been a mysterious year for Gene Clark – arguably the height of his success and notoriety. Do these two releases help unravel the mystery or add to it?

Both, I think.  The mysteriousness of the period is the result of a few things, not the least of which is an abrupt end to any kind of documentation of Gene's daily activities.  I'm sure you've read Christopher Hjort's excellent book that chronicles the day-to-day goings-on of the Byrds—recording sessions, gigs, TV appearances, etc.  After Gene stepped off that plane bound for New York, which effectively ended his life as an official member of the Byrds, we lose track of his daily life.  Everything we know has been put together like pieces of a puzzle.
About a month after that infamous incident at the airport, Gene wrote a postcard to his parents, while he was on a self-described "retreat" to Big Sur. It's a fascinating glimpse into his mind in the immediate aftermath of his leaving the Byrds.  Before this postcard surfaced a couple of years ago (which can be seen, front and back, on Ingrid Neimanis' wonderful Gene-Clark.com site in one of the newsletters), we had to guess what was going on with him, try to decipher clues from songs, get hearsay recollections from friends, family.  But this was evidence in his own hand, his own words. It's of great importance for what it says, of course, but also for what it doesn't say.  There's no mention of the Byrds, the split, the scene at the airport. No malice, no bitterness, no self-pity.  When you remember that the guy just left a band coming off two #1’s in the same year, the grace and humility in his words is overwhelming. But then, one remembers that it's only a postcard, not a letter, and by definition, maddeningly brief. Should it be analyzed as a window into his soul?  Or is it just a guy trying to work things out, sending his mom and dad a postcard to say he was thinking of them?  So a bit of the mystery is solved, for sure, but this only leaves further questions...to which we will likely never get answers.


Like me, you’ve always been intrigued by this period of time. Gene looked fantastic. We know he had the talent. But 1966-1967 is such a missed opportunity.

Was it a missed opportunity? And if it was, I'm not so sure we should be placing the blame squarely at Gene's feet, either. For a long time, the pervading narrative among writers (myself included) was that Gene blew every chance and self-sabotaged at every turn. I think we need to change that narrative, or at the very least take a more nuanced approach; maybe avoid the temptation to generalize things so much, and always at Gene’s expense. Sure, Gene exhibited aspects of self-sabotage on occasion (I mean, who hasn't?) but we need to acknowledge the times in which he did everything right.  It makes a nice, neat story to blame him for everything—and to this day there's no shortage of people who do that—but I think in this particular period he, for the most part, got it right. I think Gene Clark With The Gosdin Brothers is bloody brilliant, start to finish. Not a scrap of filler. Same with the rejected singles ('Back Street Mirror'/'Don't Let It Fall Through' & 'The French Girl'/'Only Colombe'.  It wasn't Gene's dumb idea to give the Gosdins co-billing (that was Jim Dickson's rather dubious decision) and it certainly wasn't Gene's idea to leave Columbia. They dumped him. They gave up on him—at a time when loyalty and trust in his artistry might've made a huge difference. Now, I ask, who missed the opportunity there? 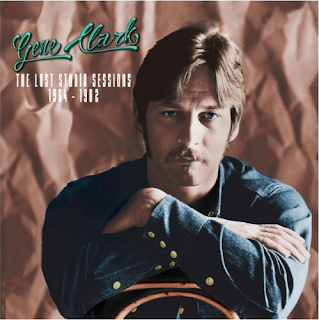 You helped get this music out. But why has it taken this long?

Because Gene's music was never about sales.  He always put art first.  From his complex lyrical wordplay to the fact that some of his most brilliant songs have no discernible chorus whatsoever to sing along with (quick: what's the chorus of 'Echoes'?), Gene was never going to be an easy artist to market. If it was difficult when Gene, the erstwhile Byrd, was still a big star, how does one justify it now, when it's difficult for everyone to sell records?  We need more people like John Delgatto at Sierra Records and Cheryl Pawelski at Omnivore.  These people are my heroes.

Meeting Ingrid Neimanis (who runs the Gene-Clark.com site, did the artwork on the E.P. and is known online as Neon Brambles) was a changing point in my life. I'd finally met someone who got Gene Clark the same way I did.  It was an honour to work with her, both on this project and The Lost Studio Sessions before it, because we both fought so hard and for so long to make it happen. I'll never be able to thank her enough for her encouragement and support. 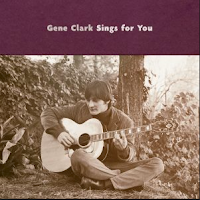 That's a genuinely tough one to answer, because we simply don't know the full extent of what's out there. So much is undocumented or lost to time.  Gene wrote so many songs and moved on from them so fast.  It's impossible to take a full inventory of extant material. One hears rumours and speculation, and it’s usually just rumours and speculation...mixed with a lot of wishful thinking.

Take Gene Clark Sings For You. Finally out, at long last—which is great—and yet, even after all this time we still have no idea of who played on it with Gene, apart from the keyboardist Alex Del Zoppo!  Even Del Zoppo himself doesn't remember, which is unsurprising when you're a Gene-fan. You expect these roadblocks. They're infuriating and enticing, all at once. You just take the hit, and keep moving forward. Chalk it up to more of that mystery we were discussing. On one hand we know more than we did before—another piece of the '66-'67 puzzle has been located.  Good, so that's all cleared up then, right?  Wrong! It only deepens the mystery, and prompts a new set of questions. I'm sure you've heard the track 'Doctor, Doctor' that's also included in the new Sings For You release. How come we've never read about the recording session for that before?  I knew of the existence of an solo-acoustic demo of the song, but to find out that there's a full-band version is almost overwhelming. But the added bonus of its being an extraordinary song makes it all the more special.

Johnny Rogan talks about a song called 'That's Why', recorded during the sessions for the first solo album.  Reading between the lines, it sure sounds like he's heard it. So why hasn't that turned up on any re-releases of the album? And what else is out there in the hands of collectors? What other material lies waiting to be discovered, restored and released? You can really drive yourself mad thinking about these things. But I love a good mystery.


Both the Back Street Mirror E.P. and The Lost Studio Sessions 1964-1982 are available from Sierra Records.
Email Post

Smash Addams said…
Thanks to both of you and everyone else that has made this at all possible. I absolutely love GC and hearing stuff from this lost period is a revelation! Cheers!!
30 June 2018 at 14:36