Skip to main content
Posted by The Clarkophile February 03, 2020

Recorded 30 years ago today...The Top of the Mountain: 'Your Fire Burning' (Part 1)

The Top of the Mountain

In 2014, I began a seemingly endless series of posts that counted down my TOP 50 Gene Clark songs.  Almost six years on, I will now confide that I had mixed emotions about that whole series of posts—mainly because I'd knowingly put myself in the position of adopting a lazy, modern style that reflects the fast-food side of journalism: the dreaded listicle.

At the time, I felt that this approach would not only allow me to cover a lot of Gene's best moments in a shorter span of time (now I'm inclined to think, what was the hurry?) but it would also provide the perfect opportunity to spotlight  Gene's often-ignored accomplishments from the 1980s forward.

And so looking back at the TOP 50 posts, I can laugh at some of the ridiculousness of the exercise: upon what basis did I decide that 'Polly' (#26) rated more highly than 'No Other' (#38)? And what of 'After the Storm' at #48, which barely made it on the list at all—yet I can remember commuting to work one day and having a sudden urge to hear that specific song over any other, and becoming frustrated when I realized I hadn't thought to sync it to my iPod.
And so while I freely admit the exercise was largely a sham, I did put a lot of thought into the top 20 songs, and especially the top 5, posted below (with embedded links to my corresponding blogpost for each):

As you can see from the links, there's posts on this blog specifically devoted to each song—except the number 1 song. Even in the TOP 50 countdown, I limited my thoughts to a few words:

To my knowledge, there are only four extant versions of this song.  The first is a sketch demo, just over two minutes long.  It is included on the fan-created 7-disc "box set".  The second is a rather echo-ey demo featured on Gypsy Angel; the third was recorded during Gene's tragic "last stand" at the Cinegrill from April 1991; it gives us a glimpse as to how the song might've sounded when fleshed out by a full band. The fourth, recorded with Carla Olson at McCabe's in 1990, the one I've chosen as my number 1 Gene Clark song, is the closest we'll ever have to a definitive version.  Though rough in places it, like 'My Marie', stands as a testament to Gene's extraordinary ability to turn what might've been just another let's-just-play-get-the-money-and-go-get-a-drink gig into a one-of-a-kind, life-changing experience. At the end of the song, Carla Olson says only: "Gene Clark."

Because nothing more needed to be said.

Committed, passionate, dignified, blessed by the angels, this is, quite simply, as good as it gets. Here it is, folks, the top of the mountain.

Up until now I've avoided sharing my feelings about "Your Fire Burning." Oh, sure, I've trumpeted its brilliance at every opportunity; I went out of my way to spotlight it in my first story for Shindig!; over the years I've rhapsodized about it on numerous music sites and web groups, told friends about it, etc. But I've never talked about it at length.

Well, perhaps it's because the song holds great personal importance to me; it looms large in my own personal mythology. It is inextricably tied to specific people, places and situations in my life.
My reticence comes from the feeling that I'm too close to it; that I'm incapable of anything resembling objective assessment. The greatest fear, however, is that I won't do it justice, or capably explain its lasting significance to Gene's legacy.

Upon its release in 1992, the year after his death, it had the distinction of being the first previously unreleased song of Gene's that I'd heard from his latter-day output (the Echoes compilation, released in September 1991, featured previously unreleased material from the 1960s). Recorded on February 3, 1990—and released two years to the month later on Silhouetted in Light, in February 1992—it was recent enough to feel new and fresh to me...even as it signalled the beginning of Gene's remaining 15 months with us.

And so the poignancy was built-in, unavoidable. For me, the song resembled something akin to sacred music: impervious to the slings and arrows of critical assessment. It could never be anything other than the top of the mountain; the finest, most distinguished of accomplishments.

Time has not dimmed this view.

The mourned provides solace for those in mourning

In 1992, I had a roommate who worked in a record store.  To the best of my recollection, it was he who brought news of the imminent release of Silhouetted in Light. I seem to recall placing a special order for the album, so that I could get it as soon as it was released. 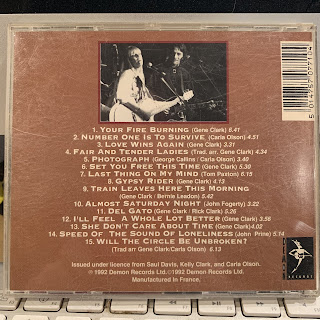 When it arrived, I quickly scanned the back cover to check out the songs Gene and Carla has performed that evening. "Your Fire Burning" made an impression on me before I'd even heard it.  For starters, it struck me as odd that Gene and Carla opened the show with a brand-new song (assuming the track list was kept intact); secondly, I was intrigued by the time of 6:41. (Note: I would not hear the No Other album until 1993, so the idea of a six-minutes-plus Gene Clark song was foreign to me.)  I quickly assumed that the excessive length would be due to introductions, on-stage banter, tuning, etc.

And it was under this assumption that I hit play on the CD and started to leave the room to get something, only to be stopped in my tracks by Gene's voice.

They were going right into the song? I turned around, sat down.  I listened.

The top of the mountain was within view.

The year of 1992 was among the roughest of my life. Apart from the fact that I—The Only Living Gene Clark Fanboy in London, Ontario—was still grieving Gene's death in a solitary vacuum, I was also besieged by a series of losses and disappointments that left me reeling. The arrival of 'Your Fire Burning' into my life felt like a posthumous gift from the spirit of Gene Clark himself, as though he were somehow capable of sensing my despair, and sending me solace in song. And while that was merely a fanciful thought to comfort myself in a time of distress, the reality of how the Silhouetted in Light album came to be recorded and ultimately released, is enough to make one believe in the abiding power of angels.

The Butterfly Effect: how one small act gave us Silhouetted in Light

The Butterfly Effect: In chaos theory, the butterfly effect is the sensitive dependence on initial conditions in which a small change in one state of a deterministic nonlinear system can result in large differences in a later state. —Wikipedia

There are times when I marvel at the various ways in which a simple, seemingly inconsequential, choice can spark a chain of events that can create a huge impact further on up the road. Such is the case with the McCabe's version of 'Your Fire Burning', a song that was not captured in a polished studio recording before Gene's death. All extant versions are treasured, of course (and will be duly discussed in Part 2), but it is this version that first captured my heart and remains, to this day, the closest I've heard to a definitive recording of by Gene Clark. But the chain of events that led to its existence are a perfect example of the a positive manifestation of the Butterfly Effect.

In Timeless Flight Revisited, author Johnny Rogan asked Saul Davis, Carla Olson's husband and Gene's erstwhile manager, about the circumstances under which the tape was made:


"At the end of the night, the sound person tapped guitarist Duane Jarvis on the shoulder and said, 'Would you like a tape?," Davis recalls. "He gave it to Duane and we we didn't even know about it. After Gene passed away, Duane called me and said, 'By the way, I have a tape from McCabe's.' I said, 'I can't believe it.' It was primitive but perfect as far as being a representation of that night and allowing us to put out something that people want to hear."

Was it a sudden impulse? Usual practice? Whatever the reason, had the sound person not had the presence of mind to throw a cassette into the soundboard, I would have never heard these precious six minutes and forty-one seconds of 'Your Fire Burning,' let alone the other performances captured on that distant evening, 30 years ago today.

And for that I am forever grateful.

skipway said…
Hey Tom,
I haven't read Rogan's books, so I hadn't heard that story about the cassette of the McCabe's show. I also didn't know Saul was married to Carla. I would think it would be a standard practice for McCabe's to tape all their shows, but it sounds like it wasn't/isn't or surely Saul would have known about it. So, serendipity! Re Fire Burning, it's a stunning song but filled with so much sorrow. It is obviously autobiographical, so I felt uneasy listening to it initially.

Re Polly in your top 50, It is not one of Gene's more profound songs, but it has a captivating melody and sets a great mood of longing. It is one of my favorites.

I look forward to your other Fire Burning posts.

Unknown said…
I wonder who “ that sound person” was and if they are still around? Were they a fan of Gene’s or of Carla already? Clearly they expected or hoped for something memorable to come of that collaboration that night? It is amazing how one person’s thoughtfulness on the night can echo loudly down the years that followed. Perhaps they were a friend or acquaintance of the guitarist Duane? Why else would they give a tape of the night to him rather than to either Gene or Carla? Can Saul shed any more light on this story? This song is such a heartbreaker. 😔😭
12 February 2020 at 11:34

Bain said…
Thanks for your insights.
Your blog must be one of the reasons why Gene is receiving such overdue attention these days.
14 February 2020 at 16:50

majestika said…
You put me on to the majesty of this most beautiful song, for that I will always be grateful!

I actually only stopped by to let you know this video popped up today in case you hadn't seen it.