Skip to main content
Posted by The Clarkophile December 23, 2010 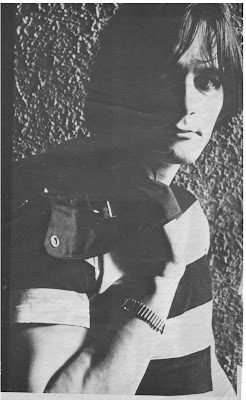 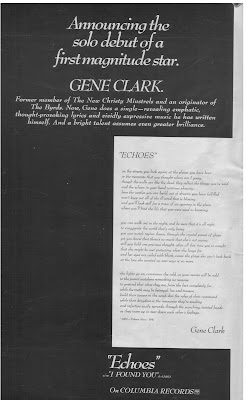 Left and right:
The ad placed in Billoard to announce the release of 'Echoes,'
reprinting the full lyric sheet.
(click to enlarge)
In 'Echoes,' the Baroque-pop masterpiece that kicks off his debut 1967 solo album, Gene Clark analyzes the previous three years of his life while taking a pot-infused stroll down Sunset Boulevard.

The first four lines of the song provide brilliant exposition for the dual narratives (past/present) to follow.

On the streets you look again
At the places you have been
Or the moments that you thought
Where am I going.

One can imagine Gene's having written these lyrics in the immediate aftermath of his split from the Byrds. Only a few months prior to that aborted plane flight to New York, he (along with Arthur Lee, Roger McGuinn, David Crosby and a few others) had been one of the Young Kings of Hollywood; a front-and-centre member of the biggest American band since The Beach Boys.

And in early '66 he had abandoned/been abandoned by, his fellow Byrds.

It must have been humbling, possibly even a little humiliating, to walk down Sunset Strip as a former member of the Byrds. Imagine how many times people got in his face demanding to know why he left the band.

How could he have explained that he had shot to stardom and suffered a debilitating, untreated nervous breakdown in the span of less than a year, and that the former very likely precipitated the latter? How could he have explained the brotherhood of the Byrds was built upon a shaky foundation of envy, sarcasm, ambition and infighting within which he was far too sensitive a soul to exist?

Perhaps it is for this reason the evening sojourn which constitutes the in-the-present narrative takes place at night, when he would be less likely to be recognized: "You can walk out in the night/and be sure that it's all right."

The brilliance of the opening lines lies in the communion of literal and figurative descriptions of movement and place. (Spatial metaphors abound in Clark's '65 to '69 output; check out how many times he uses words like "beside", "behind", "ahead" "in front of" as descriptors of one's status in relationships. Definitely a theme to be pursued in further Clarkophile posts.)
He looks backward (in his mind) while walking forward (literally) to ask the question "Where am I going?"

The implication is clear: the question is as relevant now (as an ex-Byrd) as it was upon his arrival in L.A. as a callow farm boy.
Though the walls are like the dead
They reflect the things you've said
And the echoes in your head continue showing
Here the castles you can build
Out of dreams you have fulfilled
Won't keep out all of the ill wind that is blowing
And you'll look still for a trace
Of an opening in a place
Where you'll find the life that you were used to knowing.
As the walk down the street continues the reasons for the self-examination, the simultaneous looking back/looking ahead, become clearer, as does the compulsion to get out of the house in the first place.

The decision to leave The Byrds at the height of their fame was a head-scratcher for friends and fans alike, but for Gene it appears the immediate implications and long-term repercussions of his actions dogged him relentlessly. It's clear the highly strung Clark was tormented by his own thoughts, perhaps even doubting his capacity to make solid decisions in his life.

It would be reasonable to assume that during this time he may have been experiencing second thoughts about having missed that plane.

What are the echoes that continue showing? In an ingenious bit of synaesthesia, it is the very decision to leave the Byrds, with all its professional ramifications and personal reverberations, which defines the echo: it is the gossip echoing among fans, broadcast over the news.

I'm reasonably certain that among the doubtless bemused L.A. music community, at least among those outside the Byrds' immediate circle, the phrase "What the fuck?" must have been uttered on several occasions as the news of Gene's departure broke.

For Gene, the echo - something we usually think of as being heard, not seen -is made manifest in the gloom of depression ("the ill wind that is blowing") that descended upon Clark in the immediate post-breakdown period.

You can walk out in the night
And be sure that it's all right
To exaggerate the world that's only being
You can watch Regina dance
Through the crystal panes of glass
Yet you know that there's so much that she's not seeing.

A nighttime walk down the Strip provides temporary solace from the pounding echoes, but this trip can't be undertaken without herbal assistance "to exaggerate the world that's only being."

Stopping by the Whisky, Clark sees Regina, a girlfriend who works as a go-go dancer.

Regina doesn't spot him, nor does she see that he has already moved on to Michelle Phillips. ("You know that there's so much that she's not seeing" most certainly refers to the affair with Michelle, but the line may also describe Regina's obliviousness to the sexual objectification inherent in her work.)

Now the focus shifts squarely upon Michelle Phillips.
Still you hold one precious thought
After all this time you've sought
That she might be just protecting what she longs for
Gene wants to believe that the clandestine nature of their relationship ("protecting what she longs for") is an indication of Michelle's commitment, but he senses some ambivalence on her part.

And her eyes are veiled with black
Cause she plays she can't look back
At the love she wanted so, now says is no more

While Michelle claims her relationship with "the love she wanted so" (i.e. John) is over, Gene senses she is struggling to convince herself - and him - of this ("she plays she can't look back").
The lights go on, commence the cold
As your senses will be sold
To the parrot watchers mimicking no reasons
To pretend that what they are
From the fact completely far
While the truth may be betrayal, lies and treason
Back at the Whisky, the lights come on; it's closing time. No longer cloaked in the darkness of the streets or his usual VIP booth in the dimly lit bar, Gene is besieged by inquisitive Byrds fans ("parrot watchers"). Their collective cross-examination constitutes an assault to his senses that mimics the aggressive, unsympathetic group dynamic he had just escaped in the Byrds.

Build their towers in the sand, don the roles of their command
While the kingdom is the innocence they're stealing
And infection easily spreads
Through the searching, twisted heads
As they team up to tear down each other's feelings.

Having ventured out in the night to escape inner turmoil caused by his leaving the Byrds,
Gene is now reminded of them ("The truth may be betrayal, lies and treason").
And within that paradoxical, confounding philosophical puzzle - twisting and spinning in on itself ad infinitum - Clark deftly encapsulates the manipulative twisting of words that often occurs during the sort of arguments and conflicts that characterized his life in The Byrds.
As the Young Kings of the Sunset Strip, The Byrds created some of the most vibrant, eclectic and ambitious music to emerge from the 1960's. But the group itself resembled "towers in the sand"- tentative constructs reaching dizzying heights but doomed to imminent collapse - even as they were enjoying their greatest success in 1965 ("don the roles of their command").
As we know, the original quintet would be hopelessly splintered before the end of 1967, and Clark's concluding lines confidently presage the occurrence. With the kind of insight that could only be exhibited by someone who was a part of it, Clark assesses the dysfunctional, self-destructive nature which manifested both The Byrds' artistic brilliance and their eventual breakup: "They team up to tear down each other's feelings."
As fuck-you lines go, this has to be one of the most incisive and insightful ever written. Anyone who has ever heard the studio argument included on The Notorious Byrd Brothers remaster can attest to its veracity.

The decision to release this stately, elegiac gem as the lead-off single from Gene's first solo album was perfectly understandable.
It is, in my opinion, one of the true masterpieces of the '60's.
But, to be fair, it has no chorus, no instantly identifiable hook; by virtue of the complex lyrics alone, one cannot easily sing along with it like, say, The Beatles' 'Eight Days a Week.'
In retrospect, the peppy country-rock prototype 'Tried So Hard' might have been a better choice.

But Columbia believed in Gene, at least in the beginning, so one cannot second-guess them.
In truth, Columbia got it right. It was the fickle record-buying public that got it wrong.

In spite of that, the echo of Gene's genius continues to be shown.
Email Post

Don Thieme said…
Great blog. I never really thought that his lyrics came out of his personal experience, but now I understand how that could have been
24 December 2010 at 20:46

Jingle Jangle Mourning said…
It took a while but this post was really worth waiting for. You really dig deep into Gene's mind and his work, it's really admirable. "They team up to tear down each other's feeling."- it seems so obvious that this is about the Byrds now. Left me gutted, to be honest.

ge said…
Excellent analysis; I'm not 100% convinced you match all the 'A's to 'B's in terms of words & psychological-biographical meanings: it would be a pretty limited poet who was too tied to expressing just his own experiences, rather than evoking them in others. the transition of Regina to unspoken Michelle is bold but...justified?

ECHOES's also miraculous in its form, the instrumentation & arrangement, the 'saving of the day' represented by Leon's contrib.! --no way the shortness minus the strings coulda flown--

+ as you note, Columbia and posterity indeed A-r-t [$$$ be damned] was very well served by the A&R/whichever higher-up OK'd that Billboard campaign-- was it used elsewhere he wondered?

Gene gets the laurel wreath in capital Eternity for a song like this
30 December 2010 at 05:46

The Clarkophile said…
To GE
That's fair. Obviously I'm just writing my own impressions of Gene's work. I don't pretend that my interpretations are necessarily accurate or wholly representative of Gene's intended meaning(s).
I invite people to interpret the Regina reference in any manner they wish---in fact, I insist upon it--lol.
30 December 2010 at 21:40

Sha said…
Hi Tom,
great to have you back with a new analysis. It strikes me that the narrator is constantly addressing a "you" instead of speaking in first person singular. It's a neat device to keep the lyrics ambivalent making it difficult to say when he is referring to himself and when to someone else. I think this really suits the mood of the song. Gene seems to be watching himself and the world around him from a slightly detached position. I think he finds it hard to fully understand his emotions and what is happening.
Sha
15 January 2011 at 05:06

superjays said…
I love this song. The poetry is beautiful. I like that it's left vague and abstract so that you could apply it to multiple situations. Gene was something special, no doubt. The imagery, the emotions, the atmosphere he is able to evoke astounds me no matter how many times I listen to one of his songs. Plus there is his delivery, the haunting melodies, and that gorgeous voice! He was great.
13 August 2011 at 00:19

Unknown said…
Came upon this by chance, the song is a baroque/pop masterpiece,without knowing the background to the song, it's gonna leave you slightly confused to its ultimate meaning, but that's ok, at the end of the day (sic), that's what all great songs are all about, been a Gene Clark fan like forever.lol
11 September 2020 at 23:42