Revisiting The Byrd Who Flew Alone 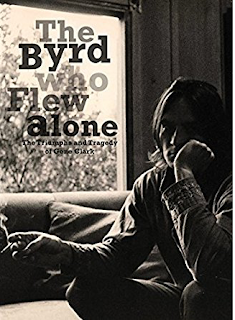 A few days ago a comment was left by "Sky Bird," a reader of this blog, with respect to my October 17, 2013 interview with Paul Kendall, the director and driving force behind the superb Gene Clark documentary, The Byrd Who Flew Alone (copies of which are still available in limited quantities from Four Suns Productions -- makes a great Christmas gift!).
Because the comments section isn't easily accessible, and in this case buried at the bottom of a four-year-old post, I had my doubts as to anyone would ever see Sky Bird's take on things, which I thought was a shame since he raised many interesting questions (even if I did not necessarily agree with them). As we know, there are always at least two sides to every story, so I thought it was incumbent upon me to take this opportunity to ask Paul whether he would care to respond. Paul provided a swift reply, which I greatly appreciate.

So what follows is Sky Bird's original comment, followed by Paul's response.

I enjoyed the film, and glad it was produced.

"However", if any of you have read Johnny Rogan's "Requiem for the Byrds" and its companion book just released (2017), you should recognize immediately that there is a significant "disconnect" between the film and the written, researched account provided by Mr. Rogan.

Rogan makes clear a reality which if correct, explains why Gene Clark couldn't go on working with his "bandmates". And it ain't pretty. The film "glosses" over all of this, and I suppose if it went into too much detail, might never have gotten the interviews with Crosby, McGuinn, and Hillman, or worse, been sued by them for something. It would have been stunning to listen to even one of these old men finally come clean and fess up to the fact that they were jerks to each other. Maybe Clark was also, (we all have been at one time or another), but he apparently was the wind underneath THEIR wings, at least in the formative years of the BYRDS. Without him it is VERY doubtful they would have "taken flight" at all.

The other item I picked up on in Rogan's book was about Gene's relationship with Terry Messina, apparently his "lady" after the breakup with his wife. That too was reported on by Rogan in detail, and it wasn't pretty towards the end. In fact, Ms. Messina reportedly committed suicide some years after Gene's death. LOT's OF DRUGS, BOOZE, PILLS, etc, for both of them. Sorry, "recreational" use of this crap is still VERY different from degenerating into hard core addiction. And that apparently is where Gene Clark wound up at the end.

I realize that a filmed account of someone's life is much more constricted for various reasons (time, money, intent, etc) than a full blown written account like Mr. Rogan's. And I also acknowledge that the aim or purpose may be different as well. A "tribute" for example, can be significantly different then an "expose' ". But somewhere in all of these formats, if the production is faithful to reporting on the "facts" (as best as can be established), then these have to be dealt with in either case. And IF Mr. Rogan reported these "facts" accurately, some of the most important parts of Gene Clark's life were completely ignored, or worse, left on the cutting room floor. 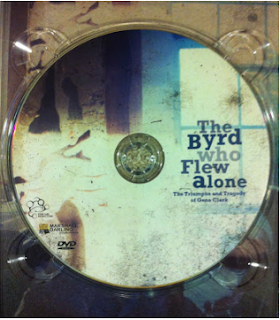 The two issues you raise are ones we were very much aware of, while we were preparing to make the film and while we were doing the interviews.
The fact is, either one of these strands of Gene’s story could justify a film in themselves. But the film we wanted to make covered the whole arc of Gene’s life and work. So, inevitably, almost every aspect of that was, to some extent, ‘glossed over’. As you rightly say, we didn’t have the luxury of delving into detail to the extent that is possible in a book – especially if that ‘book’ runs to multiple, 1000-page volumes. And, of course, the majority of what we shot ended up on the cutting room floor (for want of a more appropriate expression in the digital age).

Gene leaving The Byrds was something we raised with several interviewees – not just Roger, Chris and David. And I think our film makes it pretty clear that there wasn’t one single reason for it. The disparity in publishing earnings, and the subsequent battle for supremacy in share of songwriting, was clearly a big one. The pressures of stardom (something Gene was always ill-equipped to handle) was another. Other tales, rumours and counter rumours swirl around the circumstances of what happened on 27th February 1966. Half a century later there’s still no definitive version and there almost certainly never will be.
It’s noticeable that all the band members (including Gene) have avoided getting into too many specifics about the situation, both at the time and over the years since. It was no different with us. It’s not that we didn’t try (Roger’s wife said his interview felt more like a police interrogation at times), but all three survivors from the original band are seasoned pros who know how to deflect questions they don’t want to answer. Pushing it any harder could have jeopardised the rest of the interviews with each of them, which would have seriously impaired other aspects of the film.

Having said that, I feel that Crosby, in particular, was quite open in “fessing up” to Gene’s central role in The Byrds and his own behavioural shortcomings towards his bandmates. And I’m happy that we gave a flavour of the dynamics within the group, which made the situation far more complex than the simplistic ‘fear of flying’ explanation put out at the time.
As for Terri Messina, we made a decision early on in the process that we weren’t going to pursue that chapter of Gene’s story. Film making is all about making choices and, to be honest, that was one of our easier ones.

Gene’s relationship with Terri was long and tangled, and its ramifications have continued long after his death – and hers. Opening up that can of worms would have been something we could never have dealt with neatly and satisfactorily, within the context of our film. It couldn’t have been covered  in a couple of interview clips. And, of course, neither party in the relationship was available to give their first hand side of the story.

As it happens, several people we spoke with did spontaneously mention Terri, and the viewpoints were quite surprisingly polarised. Some clearly felt she was a thoroughly bad influence (“evil” and “a witch” were just two of the words used to describe her), but others portrayed her as very supportive of Gene and loyal to him – for better, as well as for worse.
So, to sum up, I wouldn’t say there is a disconnect between our film and the books – Rogan’s or Einarson’s. It’s more that their accounts represent the whole game, whereas we were, of necessity, dealing in edited highlights. I like to think that anyone who comes to the film first will want to explore Gene’s story in greater depth through the books. And that those who have already got the full story via the printed word will find something in the film to illuminate their understanding and appreciation of Gene and his music.