Skip to main content
Posted by The Clarkophile January 22, 2019

Another Self Portrait presented an opportunity for fans to reassess an unpopular period of Bob Dylan’s career.  Is it possible to do the same with Firebyrd, the black sheep of Gene Clark’s catalogue? Let's find out. 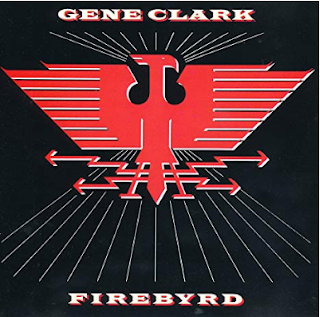 Purpose of the Firebyrd project

The foundation of this project was laid in a piece I contributed to the January 2019 issue of Echoes, the Gene Clark newsletter, produced by my friend Neon Brambles (see pic at right, link in caption).  In it, I lamented the pathetic way in which the Firebyrd recordings have been treated since the day of the album's release in 1984. From the unforgivable spelling errors in the original notes (see below) to the cheesy cover art that uncomfortably, inexplicably aligned itself with McGuinn’s Thunderbyrd, to the almost comical series of mistitled reissues that followed in the years after Gene's death (Fire Byrd/FyreBird, etc.) it is sometimes hard to argue with the common perception of the work as bargain-basement dreck.  However, I think it’s time to do a major overhaul of the period and restore Gene’s good name. This is by no means an original idea on my part. Edsel's This Byrd Has Flown (1995) stands as an admirable attempt to reintroduce/repackage the familiar Firebyrd material (remastered sound, new title, full notes, plus three previously unreleased tracks) in a respectful way.  It was not perfect, but I think they had the right idea. In a forthcoming entry I'll review TBHF in greater detail, but for now I'll give you a capsule review: it was a good idea, poorly executed.

Frankly, I am dreading the day we will hear about yet another pointless reissue of the album from unscrupulous hacks.  In this series I am going to present ideas for what I hope will be a classy, dignified alternative, one that that may one day be of use to some decent, reputable reissue company that, like me—and doubtless whoever else may be reading this now—demands respect for Gene’s work and his legacy. 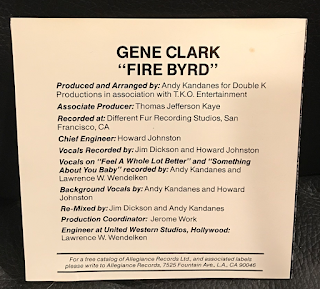 Ultimately, the goal here is to present a well-researched, ready-made, completely do-able archival project.  Pros and cons of the material will be weighed, taking into consideration things like:
After that comes the selection process, deciding what songs would be suitable for inclusion, complete with detailed reasons, culminating in a posting of the final track list.

But it’s not a done deal in my mind.  I must confess that this is not my favourite period of Gene’s career.  I have problems with some of the artistic choices he was making at this time, both in terms of the material he recorded, and how he performed the material in a live setting, with the ever-revolving-door cast of Firebyrds.

So essentially that gives us five years of recordings to wade through, appraise and ultimately assemble into a cohesive statement that will complement the original 11-track Firebyrd album.
In truth, I’m wondering if I’ll be able to change my own mind by the time I post the final track list of this fantasy collection, let alone present a convincing case to a boutique reissue label. This is a work in progress, so I’m entering into it with an open mind and I hope I can get you to follow along with me—although I’m telling you right now that nothing will ever make me like ‘Vanessa’.

How do we define the Firebyrd period?

For purposes of this project, I will not consider the inclusion of any recordings made with Carla Olson.  In my view this period directly abuts the conclusion of the Firebyrd era. Similarly, no McGuinn, Clark & Hillman recordings are eligible, as this constitutes the period immediately prior to the commencement of the Firebyrd period.

Obviously there may be some overlap, and I accept that you, as fans, may have your own interpretations of the period(s) discussed and the music that emerged therefrom, but this is the structure I’ve chosen to impose, as it makes it easier to organize.

With that said, it seems reasonable and wholly appropriate to set the start date of the Firebyrd era at 1980, just after the release of the City album by McGuinn-Hillman, featuring (the ever-marginalized and departed soon thereafter) Gene Clark.
The symbolic end to the period comes with the fateful January 1985 meeting of Gene and Carla at a Firebyrds show at Madame Wong’s West.  Fans who’ve seen Carla’s Facebook feed have doubtless seen the picture taken at the moment of their meeting. The very next month would find Gene embarking on his next, far more dubious, exercise in treading water: the 20th Anniversary Tribute to the Byrds tour, thus nailing the door on the Firebyrds era for good.

Part 2 will feature a breakdown of the possible additions to the Firebyrd material, and I'll also tackle the tricky question of what to do about the three songs that were added to Firebyrd when it was retitled and released as This Byrd Has Flown in 1995.


A note on sources: Johnny Rogan’s Requiem for the Timeless has been an invaluable resource in establishing the time line and compiling a list of period-specific material.  I’d like to thank Johnny for taking the time to answer my personal inquiries about the period in question.  He has provided me with some helpful insight about many of Gene’s unreleased recordings from the era.

david said…
I was fortunate enough to see the Firebyrds a few times; the 2nd configuration ( Peter Oliva on bass replacing Mark Andes ), was a really hot band. It's a shame Gene didn't use them on the lp. I always thought Michael Clarke was the best drummer for Gene's songs.
22 January 2019 at 22:11

The Clarkophile said…
That’s awesome! I love hearing stories from folks who got to see him.
Peter Oliva is a wonderful man.
23 January 2019 at 09:26

Craigie said…
Its I great idea and I hope you get some support to put it together and keep going with it .Good luck , if it happens and you run with it can,t wait to hear it at the other end .